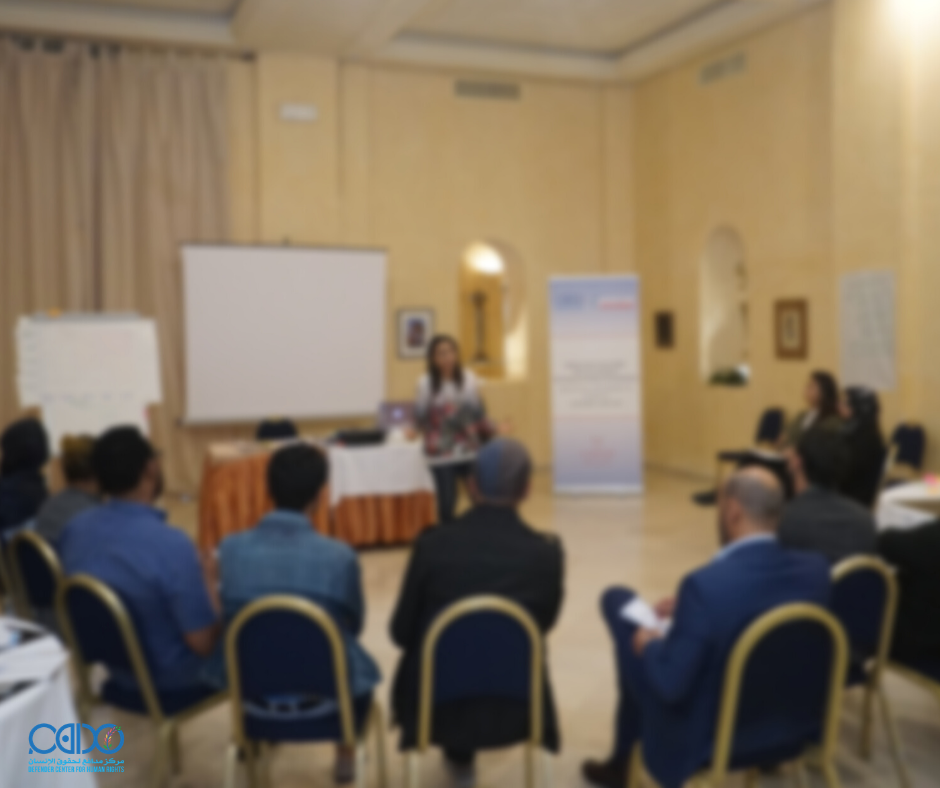 On Wednesday 3 November, the Libya Platform, the Libyan Women’s Platform for Peace (LWPP) and the Defender Center for Human Rights (DCHR), supported by the Cairo Institute for Human Rights Studies (CIHRS), hosted an event titled, “Freedom of Association: An Essential Guarantee for the Success of the Libyan Political Transition”. The event shed light on escalating restrictions on freedom of association in Libya, through unlawful executive decrees that put Libyan and international civil society at risk of reprisals from state-affiliated armed groups, in addition to restricting their work.

The UN Special Rapporteur, as the first speaker, recalled the precarious situation of Libyan civil society. Despite the positive outcomes of the February 2011 uprising, Libyan authorities have since failed to protect civil society, which has been subjected to repression by state-affiliated armed groups acting with impunity, and forced to endure draconian regulations.

Lawyer Azza Maghour in her intervention explained how these executive regulations, such as Decree 286, violate Article 15 of Libya’s 2011 Constitutional Declaration, which guarantees the freedom to form political parties and associations. She recalled that Law 19 of 2001, on the re-organisation of non-governmental organisations, is a draconian law that gives authorities and security services a blank check to control any civil society activity. In spite of this, Libyan authorities have resisted civil society initiatives to draft a new legal framework for freedom of association in line with the ICCPR.

Human rights defender Fadwa Kamel added that while one of the main challenges remains the legal framework on freedom of association, executive bodies have unlawfully taken over the regulation of civil society after 2011, which has further constrained civic space. Political fragmentation, the lack of knowledge about international standards on freedom of association, and the inability to organise activities without prior consent has hampered independent civil society, in addition to violations such as enforced disappearances and military trials.

With regards to executive regulations, the Special Rapporteur commented extensively on the draft civil society regulation proposed by the Government of National Unity (GNU) in July 2021, stating that the regulation only reaffirmed many of the restrictions imposed by Decree 286 in clear violation of Article 22 of the International Covenant on Civil and Political Rights (ICCPR). The UN expert highlighted the sweeping powers given to executive and administrative authorities to control the registration, dissolution, funding and activities of civil society organisations, without judicial review. According to the Special Rapporteur, provisions of the new regulations are burdensome, too broad and attempt to control independent civil society. He called on the Libyan government to revise this regulation in line with international standards, echoing the calls of Libyan civil society, and called for the adoption of a new law on civil society.

Furthermore, the Special Rapporteur reminded Libyan authorities that full and open engagement with civil society is critical to ensure an inclusive transition process, whereas current restrictions are counterproductive; they notably interfere with humanitarian and development work in addition to infringing on human rights. The expert expressed his willingness to share his concerns and discuss the importance of freedom of association with Libyan authorities, including in a country visit.

The Executive Director of the Civil Society Commission in Benghazi, Ibrahim Al-Maqsaby, as well as a member of the House of Representative (HoR), Dr. Rabiaa Abo Ras, also attended the event. Dr. Abo Raas expressed her support for the draft law prepared by the Libya Platform and committed to pushing for its adoption. She urged Libyan organisations to organise further meetings with other members of the HoR to raise their awareness on the subject.