The 41st Congress of the International Federation for Human Rights (FIDH), which hosts 192 human rights organizations from all over the world, decided to vote unanimously to accept the full membership of Defender Center for Human Rights.

Defender Center for Human Rights is currently the only Libyan organization affiliated with the International Federation for Human Rights, starting from the 41st Congress, which was organized in the French capital, Paris, between 23 and 27 October 2022. 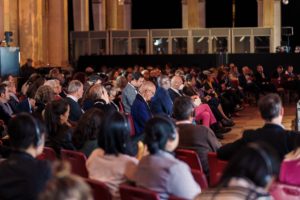 FIDH is an international non-governmental organization dedicated to the defense of human rights. It brings together 192 national human rights organizations in 117 countries. Since 1922, the FIDH has been committed to defending all civil, political, economic, social and cultural rights as defined in the Universal Declaration of Human Rights.

In conjunction with the 100th anniversary of the founding of the International Federation for Human Rights, Defender Center for Human Rights participated in the work of the Congress and some workshops, along with 180 human rights organizations and human rights defenders from around the world.

The International Federation for Human Rights (FIDH) held its inaugural session in the municipality of Paris on October 23 and 24, 2022. A statement explained that “180 male and female defenders gathered in Paris from all over the world under the slogan of the battle itself: the battle for freedom, respect for rights and those who defend them.” The debates and joint working sessions continued throughout the week at the Novotel Hotel in Paris. 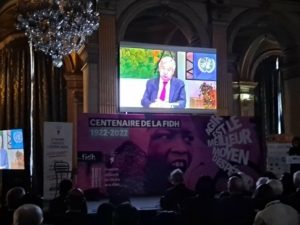 The work of the Congress began with an opening session with the participation of the Secretary-General of the United Nations, the Prosecutor of the International Criminal Court, the Special Rapporteur on human rights at the United Nations, the Mayor of Paris, and a number of political and human rights figures. The FIDH World Conference brings together network member organizations, international experts, and more than 180 participants from local civil society groups. This event was an opportunity for human rights organizations from all over the world to exchange experiences and best practices to address human rights protection challenges. (Click here to view the programme).

António Quterres, Secretary-General of the United Nations, praised the convening of the 41st Congress and said in a speech on the occasion, “I salute the work of the International Federation for Human Rights and all those who work daily for human rights and put their lives at risk.” 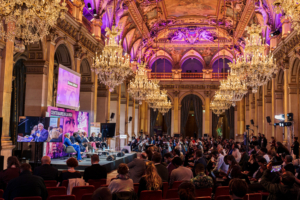 Mary Lawlor, the UN Special Rapporteur on human rights defenders, congratulated all the Congress  participants and said: “I think our work is paying off, some actors are changing their policies after we have talked to them. Building and effecting change is a collective effort for all of us.”

Anne Hidalgo, Mayor of Paris, thanked the International Federation for the opening of the Congress  and said that “since its establishment nearly 100 years ago, the federation has been striving tirelessly for respect for the rule of law and the promotion of human values.” In her speech, she added, “Paris thanks you and will always stand side by side with the human rights defenders whose work is essential”.

On this occasion, Defender Center for Human Rights expresses its aspirations regarding the hoped-for effects of its membership in the federation, through which it seeks to intensify efforts with the rest of the members to promote human rights, combat impunity, raise the voice of victims and enhance the situation of human rights and defenders, in addition to its hope to exchange experiences with all partner organizations from all over the world, in the context of the great challenges faced by human rights organizations as a result of the worrying developments taking place in the world, which would affect the situation of human rights and democracy in many places, especially the Middle East and North Africa.

The statement of the World Federation of Human Rights Organizations announced ten new rights to confront issues that create divisions, perpetuate poverty and prevent men and women from living in dignity.

This year’s FIDH Congress focused on the complexity and evolution of human rights issues, such as the environmental crisis, widespread poverty, the universality of rights, and international governance. 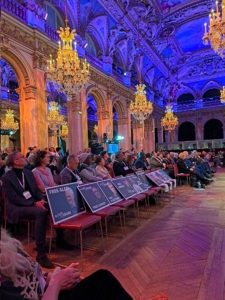