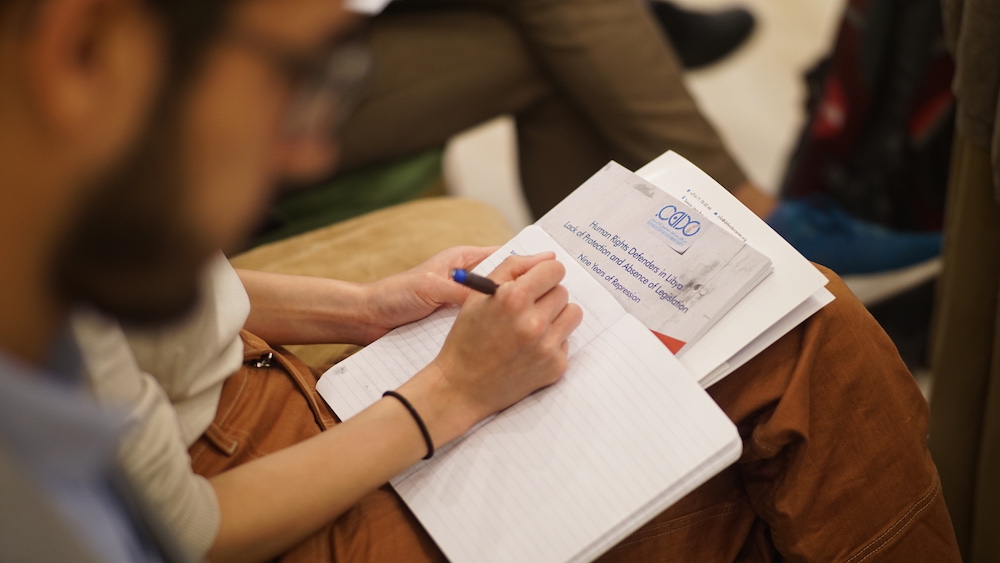 On the anniversary of the 17th of February revolution, CHRDA discusses its report in Tunis, Paris, and The Hague.

Nine years since the Libyan revolution that overthrew Muammar Gaddafi, CHRDA launched the first event to present the Annual Report of Defenders Center for Human Rights 2019 in both the Tunisian capital on the 17th of February, the French capital, Paris on the 18th of February,  and the Dutch city of The Hague on the 20th of February 2020.

Several civil, diplomatic and HRDs participated in the first event in launching the annual report under the title; Human Rights Defenders in Libya, Lack of protection and Absence of Legislation. Nine years of Repression. Which is part of CHRDA’s Defenders empowerment Protection Program 2018-2019.

The Netherlands embassy, and the Swiss Embassy in Libya, both local and international mission and partner organizations of CHRDA made opening remarks at the event in Tunisia.

CHRDA’s legal representative said in his speech that since the establishment of CHRDA, The center has been able to register 210 cases of Defenders, including 34 cases who were subjected to various types of human rights violations. In 2018, CHRDA registered nearly 9 cases in which defenders were subjected to enforced disappearance and arbitrary detention, in addition to 13 cases of threats and kidnapping attempts, not to mention 41 cases of verbal abuse, and 2 cases of physical assault.

In 2019, CHRDA was able to reach 34 defenders, 14 of which were subjected to human rights violations, 5 of those cases were threats and attempted kidnappings, while enforced disappearance reached 6 cases, most of which occurred in Tripoli, Benghazi, and Zawiya.

ICJ: The necessity of creating an international investigation and accounting committee in Libya.

During the event, ICJ called for the trial of perpetrators of human rights violations and to investigate the crimes committed in accordance with international laws and standards, ICJ also called for the need to protect HRDs and respect the right to liberty and the right to a fair trial and the prohibition on torture and ill treatment, The committee also made a recommendation the establishment of a Commission of inquiry or similar mechanism, through the Human Rights Council, to monitor, document, establish the facts and report on gross human rights violations with a view to preserving evidence.

UNSMIL: Defenders are important partners of  the United Nations.

UNSMIL, represented at the event by Neil Gilmore, praised the important role of the report on the situation of human rights in Libya. Containing analysis and findings concerning the human rights situation concerning defenders and the overall legal and policy framework. It recalls a pattern of enforced disappearances and arbitrary detention, threats and harassment to defenders, the exodus of journalists from the country, and an assault on freedoms of assembly and association in Libya.  Human rights defenders are critical partners of the UN and play a crucial role in standing up for human rights. Documenting human rights violations, supporting victims of violations, and taking steps to promote accountability and end impunity in Libya. For the UN human rights reporting, including this report, have an important protection function and make an important contribution to increasing awareness on the situation in Libya, whilst promoting future accountability.

European Union Mission in Libya: Defenders play a key role in the defense, protection and documentation.

In its speech, the EU mission to Libya presented an overview of the EU’s work with human rights defenders globally. The commitment to protect and defend human rights stands at the heart of the EU’s relations with other countries and regions. The European Union aims to strengthen its bilateral, regional and multilateral partnerships to build alliances that speak up for human rights defenders and that demand accountability for those that violate human rights and that ensure access to justice for those whose rights have been violated. The EU continues actively to work together through joint efforts and cooperation to strengthen respect for and defense of human rights and speak out against violations of human rights.

Legal, political and legislative challenges restrict the work of Defenders in Libya.

Mohamed Ansari, a researcher and lawyer at the Cairo Institute for Human Rights Studies, started his speech off about a resemblance between the restrictions imposed on freedom of expression and freedom of peaceful assembly between Egypt and Libya, , then he discussed the concept and definition of the Law on terrorism, criticized the flexible and loose standards. Also mentioning the issues defenders face; the restrictions and obstacles they face.  Finally, he criticized the draft constitution in Libya, calling for its review, and the establishment of greater guarantees of freedoms and rights in a way that guarantees HRDs work with flexibility, independence, safety by giving a positive example of the South African constitution.

On the following day, the 18th of February, CHRDA officially launched its annual report in Paris, in the presence of human rights and civil activists, in which they received a hard copy of the report in both Arabic and English.

The executive director presented the most important points of the report, during the event at the CHRDA headquarters in Paris on the 18th of February 2020, addressing the analysis of the legislative framework governing the work of human rights defenders, violations against human rights defenders and the restrictions on their freedom of expression, freedom of peaceful assembly, freedom of association and legal flaws related to the draft constitution.

CHRDA’s Paris meeting presented the most important statistics that the center has monitored through its own database, which focuses on the state of defenders in 2018-2019 through surveys and monitoring, in which focus was places on the types of violations committed and the geographical distribution of defenders by cities and their gender.

Independent political activist Tarik Al-Ghalousi from Tripoli confirmed during his speech at the event in Paris that the country has not witnessed any political improvements, and that the situation has not changed since the signing of the Libyan political agreement (Skhirat Agreement), in December 2015, bearing responsibility on international support to some parties at the expense of Libyans, and he also pointed out that the fighting defined and increased the number of attacks in which armed groups were involved, referring to extrajudicial killings and kidnappings and numerous harassment to exercise their freedom of movement, armed groups that are also affiliated with authorities of state institutions, committed many of the crimes and violations inside the detentions centers.

🔴After reviewing the #legislative structure governing the work of human rights #defenders in #Libya 🇱🇾🇱🇾, and the continued and repeated #violations against these human rights defenders throughout the country, the #DCHR recommends the following :
🔘Take urgent measures to stop the spread of armed groups in order to reduce their repeated violations of international human rights and humanitarian law.
🔘Take the necessary measures to reform the judiciary and enable its effective performance, including reforming the judicial police, to address threats preventing the administration of justice.
🔘Reconsider legislation impeding the work of human rights defenders in Libya, and remove restrictions on basic freedoms to enable them to carry out their work effectively.
🔘Enact a law regulating the work of associations in alignment with international standards on freedom of association and Libya’s international obligations under the International Covenant on Civil and Political Rights, and repeal all contradicting regulations in force related to that matter.
🔘Issue a law that enshrines the right of individuals to obtain and circulate information, since the right to seek and receive information is indispensable to the application of the right to freedom of expression.
🔘Take urgent measures to stop media practices of inciting hatred against human rights defenders.
🔘Stop the use of religious fatwas that affect the work environment of human rights defenders.
🔘Activate the United Nations Declaration on Human Rights Defenders to ensure that they enjoy the rights necessary to carry out their work and protect them from all forms of abuse.
🔘Unify the boards of directors of the Civil Society Commission in order to achieve civil society objectives.
🔘Conduct urgent investigations into all alleged violations of international human rights law, including arbitrary detention and extrajudicial killings, while providing protection for defenders of refugee and migrant rights. Put an end to Libyan and European Union policies that have caused danger to, and the prohibition and obstruction of, humanitarian organizations carrying out shipwreck operations in the Mediterranean Sea. 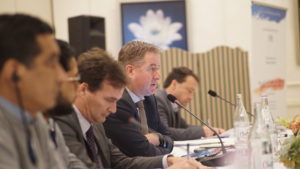 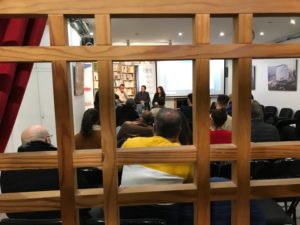 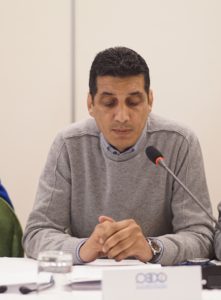 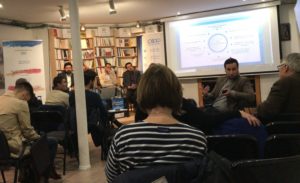 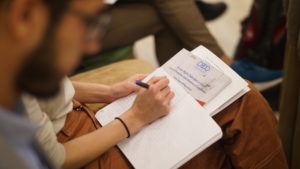 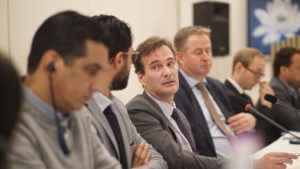 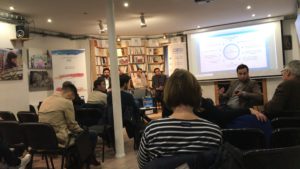 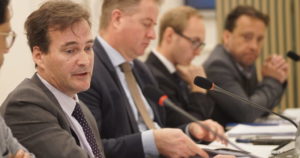 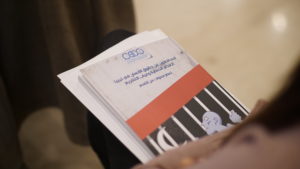 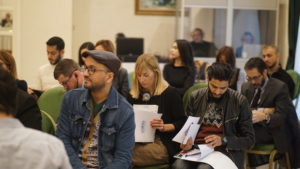 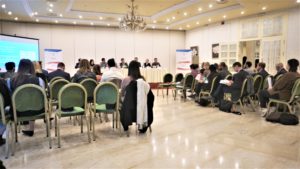 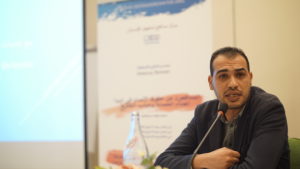 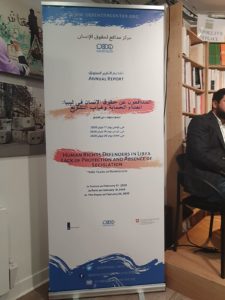 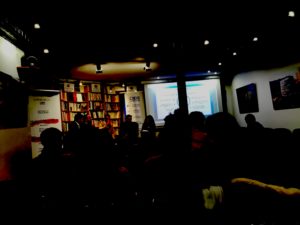 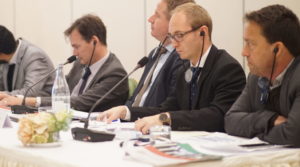 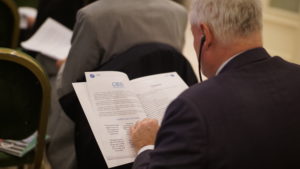 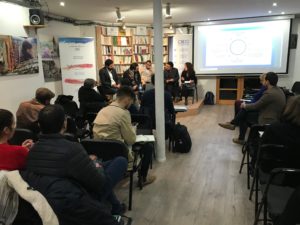 Libya Report : HRD, Lack of protection and the absence of legislation –...

Defender completed the first training course for the “Express” ...
Scroll to top