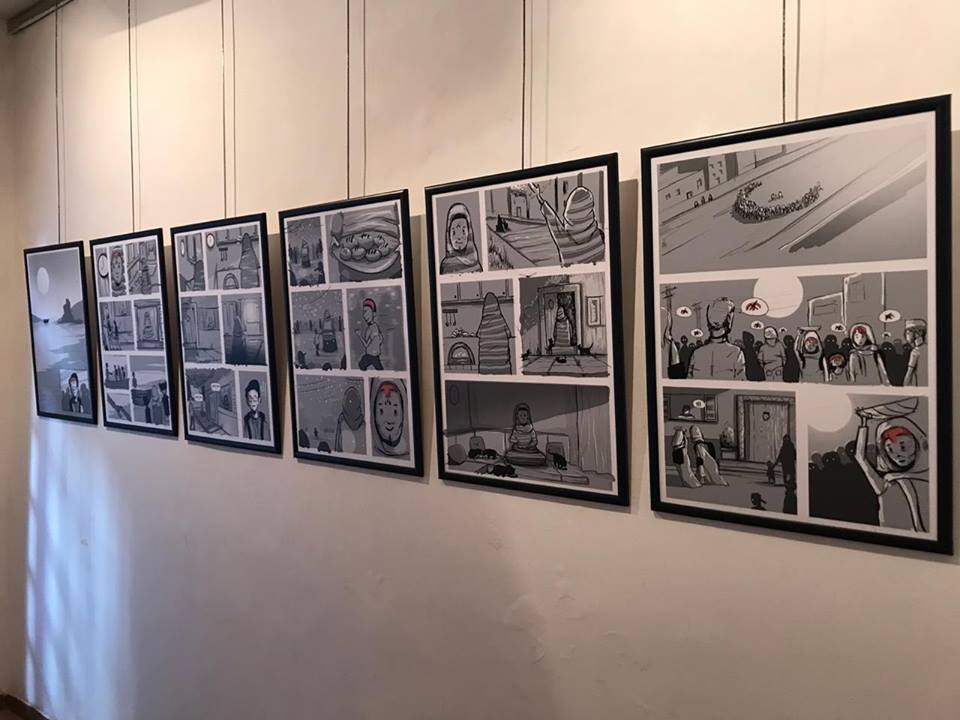 On Monday December 10, Together We Build It and Habka Magazine – in partnership with the Defender Center for Human Rights and the Libya Platform – opened the art exhibit “Ta3beer: EXPRESS IT the way you see it!” at the Art House in Tripoli to mark the International Human Rights Day.  The exhibit, co-sponsored by the Delegation of the European Union and the Embassy of the Kingdom of the Netherlands in Libya, features artwork from Cairo Institute for Human Rights Studies’ (CIHRS) campaign “Drawing for Peace” and from Together We Build It’s “Super Nasaween” campaign to raise awareness about gender-based violence. The event is open to the public from the 11th to the 14th of December 2018.

In his welcoming remarks, Alan Bugeja, the Head of the European Union Delegation to Libya said: “This year marks the 70th Anniversary of the Universal Declaration of Human Rights of 10 December 1948 – the first global enunciation of human rights. Respect for human rights and dignity, together with the principles of freedom, democracy, equality and the rule of law, are values common to all EU Member States. As such, the promotion and protection of human rights is at the heart of EU cooperation and political dialogue in Libya”. In his speech, the Ambassador of the Kingdom of the Netherlands, H.E. Lars Tummers, highlighted that human rights include the right to express yourself, the right to Ta3beer.  “Ta3beer includes the right to speak up, the right to be seen and the right to be heard”. “Special attention needs to be paid to the role of women in society”, the Ambassador continued. “We also need to listen to you to make your voices heard”.

The importance of art and culture in promoting human rights and its effective role in raising societal awareness increases and reaches larger segments, in addition to the ability of art to convey ideas simply and deeply to a large sector of society,” said Sorour al-Akkari

These opening remarks were followed by presentations from Habka and Together We Build It on their artistic experiences in the awareness campaigns, depicting social problems in Libya through drawings. According to Karim Salem, CIHRS researcher on Libya: “Culture and art are effective means to raise public awareness. Art has the capability of portraying violations against victims and the impact of these violations on society as a whole, thus raising societal awareness about the reasons behind the democratic transition’s paralysis and ways to overcome them”.

Artwork from CIHRS’ awareness campaign “Drawing for Peace” – implemented in partnership with  Habka, the Libya Platform and Lab 619 – was created as part of a contest for young Libyan artists to draw stories promoting human rights and peaceful coexistence in Libya under the themes:  detention conditions, migrants, women’s rights, citizenship and reconciliation, and elections. Four contestants were selected to create stories after being trained for five days. The stories were published in the book “Drawing for Peace in Libya”

“Super Nasaween” is an awareness campaign on gender-based violence, designed by Together We Build It. It is composed of a series of stories highlighting different forms of violence against women that happen on a daily basis. The stories illustrate three intergenerational Libyan super women who stand up against these violations and empower women subjected to violence to speak up. The campaign was first launched last year as an initiative under the international campaign ’16 Days of Activism’ challenging violence against women and girls, and reached out to over 70,000 people on social media platforms. Together We Build It launched the second part of the series during this year’s ’16 Days of Activism’ late November, following up on the empowered women, and engaging men as essential actors in eradicating gender-based violence in Libyan society.

International forum on the problems of irregular migration at the judicial and...